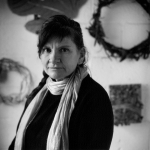 Human connection is vital in creating cohesion and repeatedly, I have seen the transformational power of artists to foster empathy. Collaborating with the Armory Center for the Arts’ Scott Ward and Lilia Hernandez, we embedded artist Kim Abeles in Malibu Conservation Camp 13 through a grant from the National Endowment for the Arts and the National Park Services inside the Los Angeles County Fire Department. Kim worked in collaboration with the paid and inmate workforces, and community stakeholders that service the Santa Monica Mountains National Recreation Area. The following reflections demonstrates the honesty, flexibility, grit, and compassion as key components in participatory art processes. —Pauline Kanako Kamiyama, Deputy Director of Civic Art, LA County Department of Arts and Culture

This project was a unique collaboration between many agencies and individuals to create a series of mixed media, educational suitcases used to teach people about fire prevention and our relationship with nature. The outcome—the suitcases, or valises—was in equal importance to the project as a process-driven idea. Planning meetings and plenty of support from institutional leadership and staff helped set the stage for this collaborative process.

Community-based artworks in general require an ability to remain organic and observant. Every person is an important participant, and though we each come to projects with different sets of skills, needs, and motivations, most importantly we are reliant on each other. I’m speaking of the agencies and organizations here, but similarly, the female inmates at Camp 13, who helped each other through our creative process. When institutions and communities come together to organize a project, in a sense, hierarchies are put aside for a moment, because no one around the table holds all the answers. Each person knows this, and each moves forward toward a worthy goal. In this case, the common goal was understood to be the development of valises as a teaching tool to educate people about fire abatement, wildfires, and our role in nature. 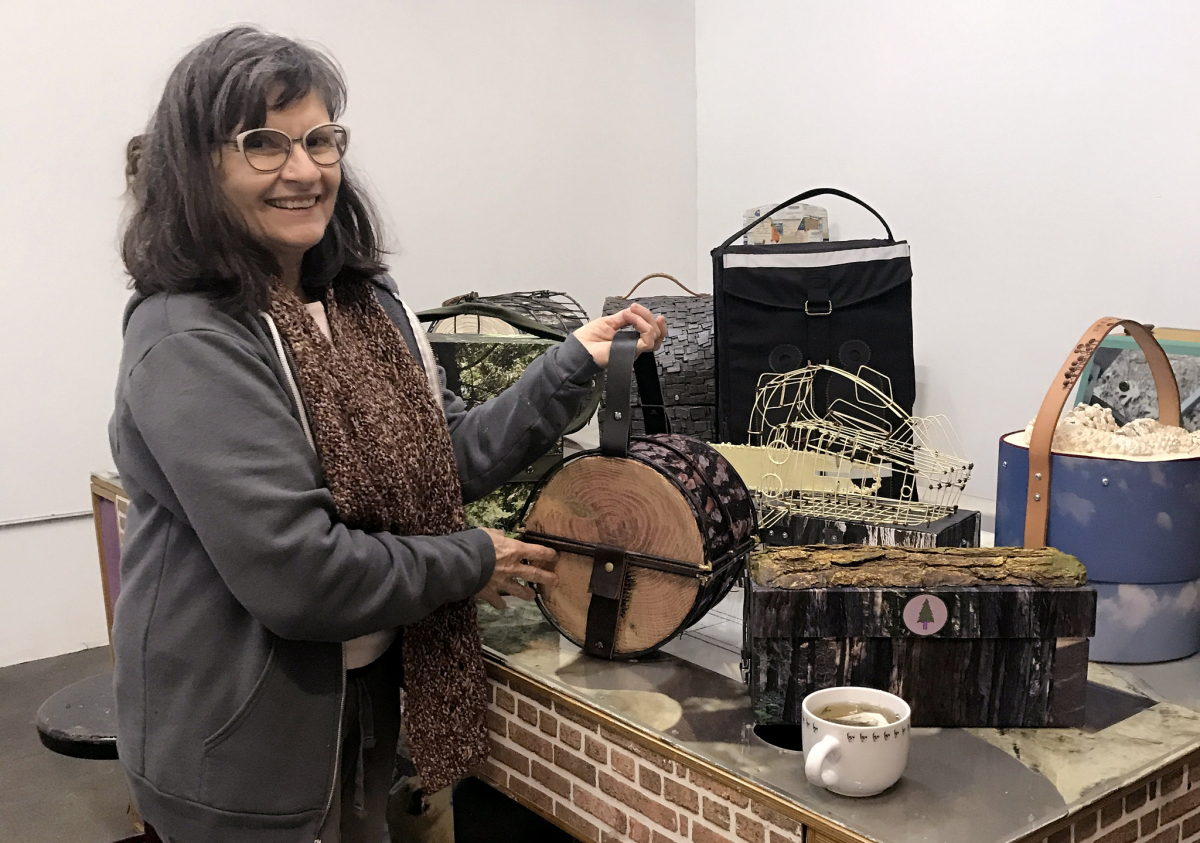 On my first visit to work with the women at Camp 13, I arrived with a game plan, and by the time I drove home at the end of the day, I knew I had to rethink the strategy. I realized that it could work well if I created a scenario where I would fabricate the suitcases, working side by side with the inmates working on their own projects—art that they could give as gifts to families. Each week, I brought materials that were similar or identical to the ones I was using to build the suitcases from the ground up. I figured that in time, some people would want to join in with the larger sculptural valises, and that is indeed what evolved. It became a studio experience rather than a classroom structure.

Many types of materials and artistic techniques were taught through the six months. In the case of crochet for a landscape in one of the valises, several women led the teaching of the techniques. I’ve never been able to get the knack for crochet; my lack of skill gave way to others stepping forward. In the end, each person who attended those weeks crocheted at least a row or two of the fiber-landscape, regardless of their expertise. 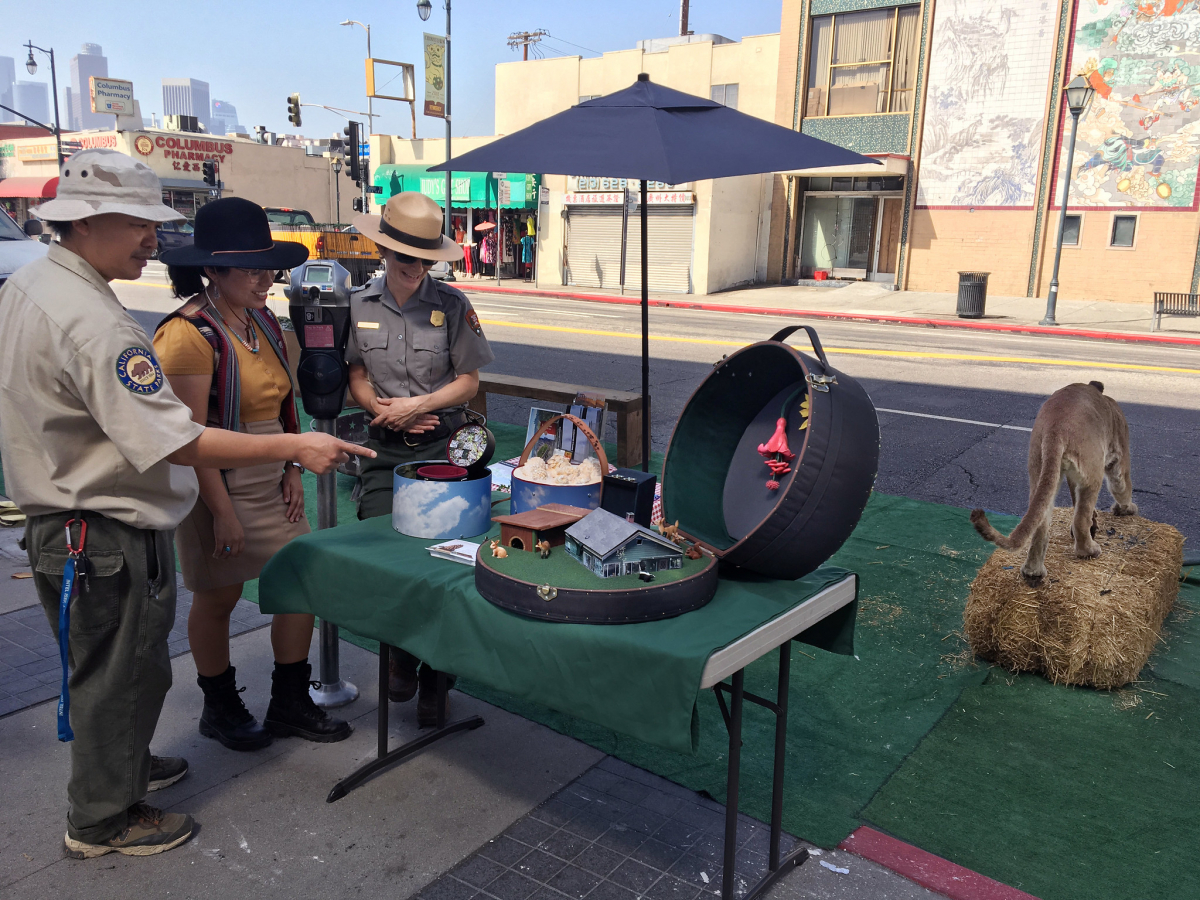 The idea of authorship, ownership, and collaboration became fluid here. One woman made small models of the McCleod tool and a Pulaski Axe (two clearing tools) for the suitcases, and this became a long-term project with multiple participants to create all the tools and supplies carried by a fire crew. The Tools valise opens to 10-feet long with the crew member position names embroidered on each section. Another woman had very inventive ideas about the interior and exterior textures for another of the suitcases and we put her idea into motion. Opinions, guidance, and redirected solutions made the results breathe.

When institutions and communities come together to organize a project, in a sense, hierarchies are put aside for a moment, because no one around the table holds all the answers. Each person knows this, and each moves forward toward a worthy goal.

Each Sunday, I interviewed the women about their experiences, the descriptions of fire abatement, the tools, and the processes that became the content and detailing for the valises. I took handwritten notes since recording equipment was not permitted. Each week there had been new women working with us, and others were away due to fires. Many women in the camp had been at the fires near Palm Desert and Hwy 38. Some returned from Yosemite, and others headed out to new fires. We were not able to photograph at Camp 13, and photography is the typical means of documenting community-based work. Unexpectedly, the lack of it allowed the residency to be a more impactful series of lived moments and memories. 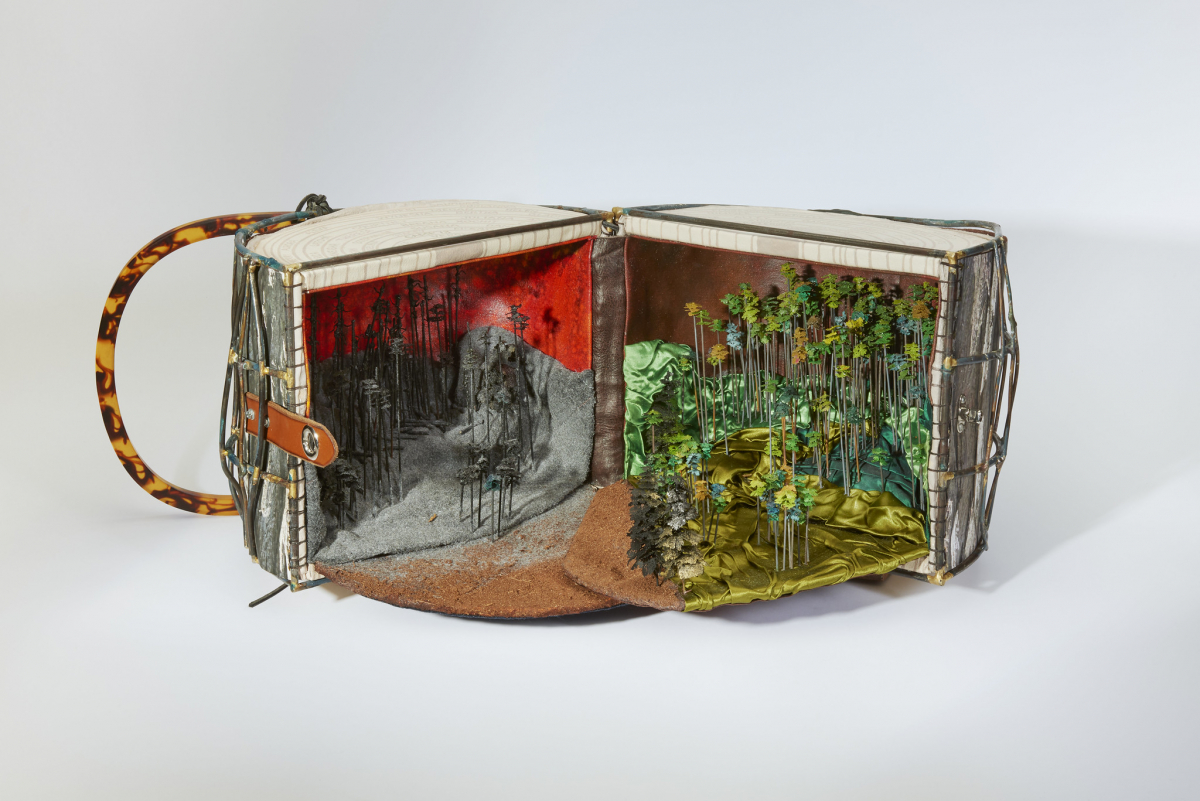 This experience at Camp 13 was a very unusual scenario. In typical situations with community-based work, the participants either have no choice but to attend, or have been given an incentive such as course credit; I am thinking of situations in my projects with teens at halfway houses, or shelters for families escaping domestic violence, or continuing education high school classes. This situation is unique because none of the inmates needed to participate. Their interest in this community effort grew from within, and I saw the genuine value in making art side-by-side, ideas generated through their own projects and efforts.

One time, an inmate came frequently to observe, but did not actively participate in the project, and one day I asked her why. She told me that she came to see what was going on each Sunday because she was amazed by the interactions among individuals who were otherwise not inclined or agreeable to connect. The atmosphere provided by the project and related processes prompted participants to interact and assist each other. 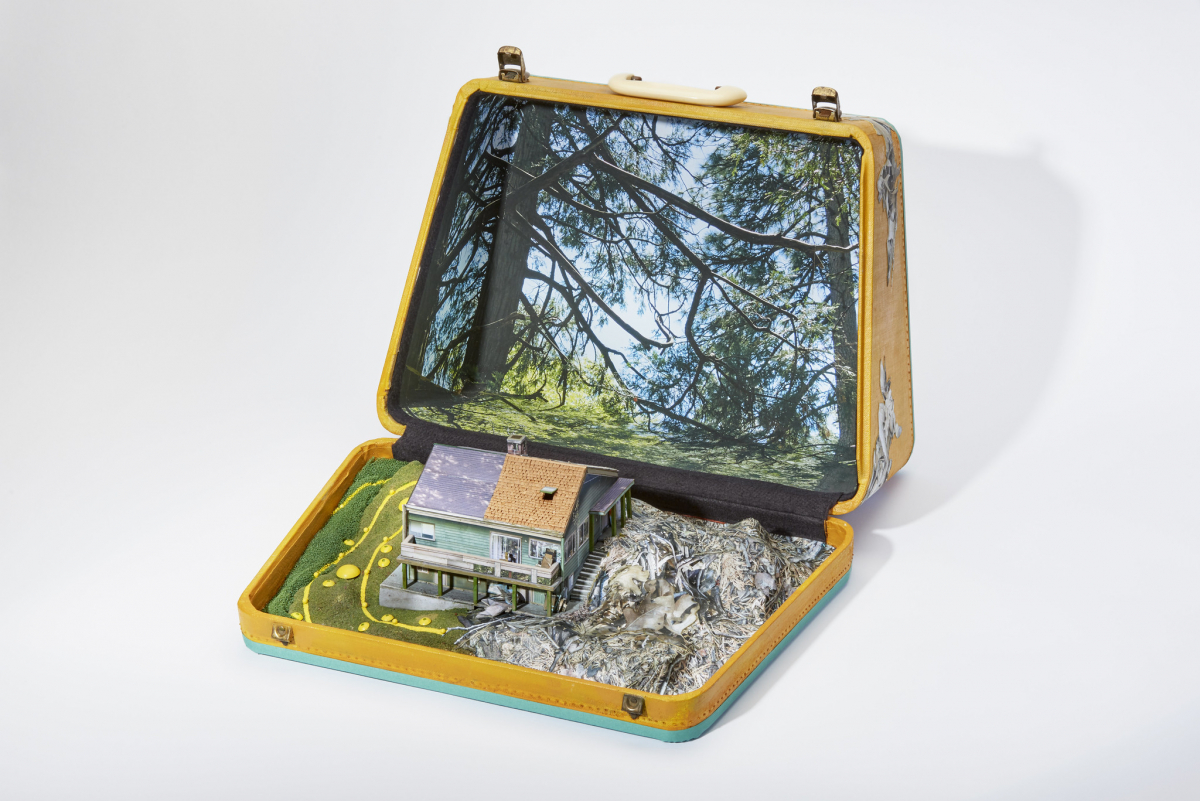 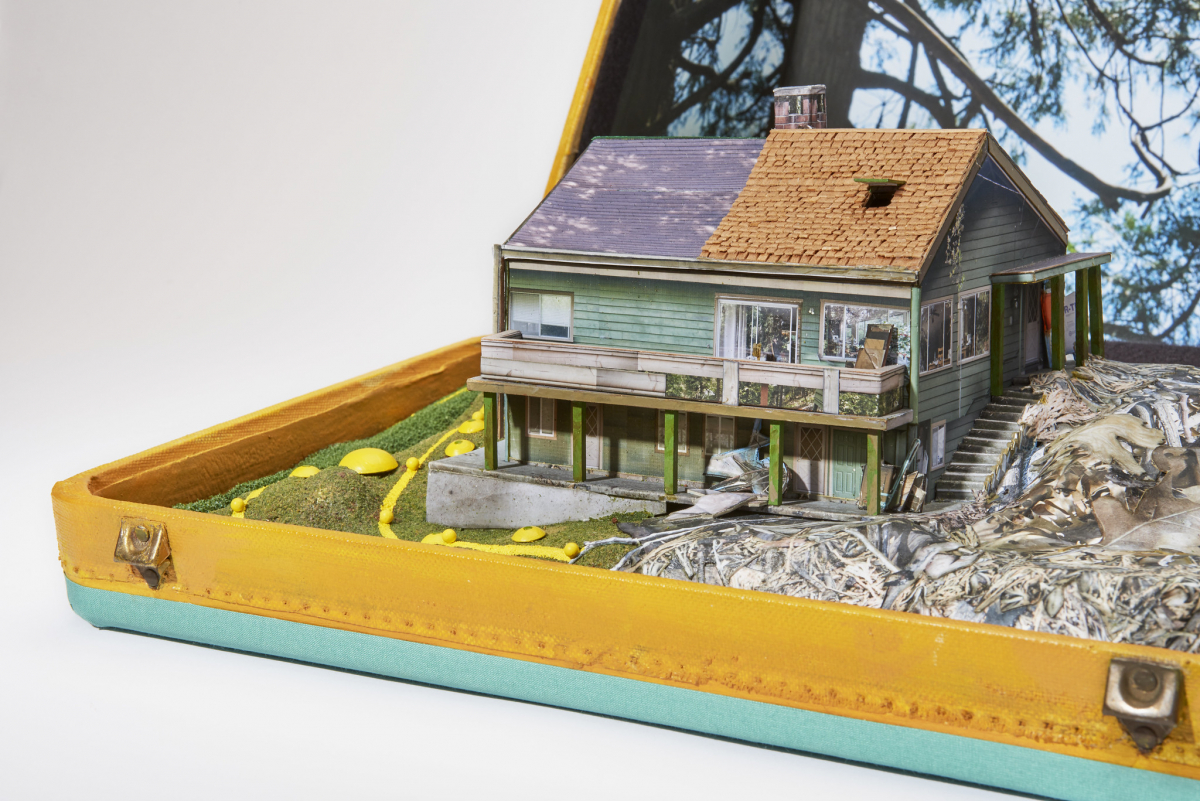 The women know well the urgency of cooperation while firefighting, of course, and the public service that they are providing sets a good example for all of us. Civic duty and helping communities are important elements in the work the women are doing, including the fire abatement that is extremely strenuous work. Rather than telling viewers that they need to be helpful with each other, the fire fighters show a role that we can all be eager to meet as part of our communities.

I can’t begin to explain how difficult it was to conclude the workshops on the final day. I created a flier to prepare the participants for this and in December, I started the conversation about the next part of the project (completing the valises and getting them out to community events). Many of the women who worked with me as early as July 9, 2017 had moved on to other prisons, or better yet, completed their term or got paroled. Everyone was told from the beginning that the completed valises would be presented in public, and there was enthusiasm about their families being able to see the art. They share a sense of pride in the hard work they do every day, whether the strenuous fire abatement or fighting wildfires in challenging terrain. The valise project managed to give a framework to hold and present their accomplishments.

This post is part of The “Public” In Public Art: Community Engagement Stories From The 2019 PAN Year In Review blog salon.