Why the Arts Matter in Your State Factsheets

Check out the Arts Action Fund's "Why The Arts Matter" factsheets that include the newest Bureau of Economic Analysis GDP numbers for your state, along with updated FY 2020 state appropriation numbers.

Facts and Figures for State Pages

Measuring the Scope of the Nation’s Arts-Related Industries

Our Creative Industries: Business & Employment in the Arts reports provide a research-based approach to understanding the scope and economic importance of the arts in America.

Arts businesses and the creative people they employ stimulate innovation, strengthen America's competitiveness in the global marketplace, and play an important role in building and sustaining economic vibrancy. (Data current as of April 2017.)

Find your FREE, local report now to get specific data for your community!

In advocacy, knowledge is power, but jobs are persuasion - find out how many jobs are created by Creative Industries in your State, U.S. Congressional District, State Legislative District, or County.

Want to know how much the arts impact your local economy?

Every day, more than 100,000 nonprofit arts and culture organizations act as economic drivers - creating an industry that supports jobs, generates government revenue, and is the cornerstone of our tourism industry.

The Arts & Economic Impact 5 study documents the key role played by the nonprofit arts and culture industry, and their audiences, in strengthening our nation’s economy.

Our national findings wouldn't be possible without the data collected from 342 participating study regions, representing all 50 states and the District of Columbia.

The diverse communities range in population from 1,600 to 3.8 million and from small rural to large urban. Our national findings are derived from the data from organizations and audiences in these communities.

Ready to find information for your community? Check out the Local & Regional Findings!

Does your community participate in the arts?

Arts and culture are a deep and intrinsic part of every community. Across the United States there are over 113,000 organizations dedicated to many aspects of cultural life.

This activity encompasses a broad range of disciplines that ranges from performing arts production and presentation, to visual arts exhibition, to arts education and arts in healthcare, to preservation and interpretation of our collective heritage.

Consumers spend nearly $150 billion annually on entertainment and the arts. How do we better understand the breadth, depth and character of this industry? The Local Arts Index was launched in 2012 as a tool to better understand the characteristics of the cultural life of individual communities as measured at the county level.

Find out how your county compares to others – explore how you measure up! 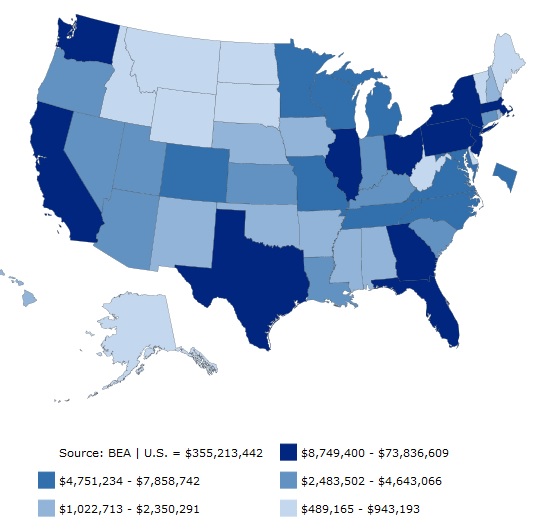 According to the U.S. Bureau of Economic Analysis (BEA), the arts and culture sector is a $730 billion industry, which represents 4.2 percent of the nation’s GDP—a larger share of the economy than transporta¬tion, tourism, agriculture, and construction. The BEA’s “Arts and Cultural Production Satellite Account” takes into account the full breadth of the nation’s arts and culture indus¬tries—nonprofit, public sector, commercial, entertainment, university education programs, etc.—unlike Arts & Economic Prosperity 5, which focuses solely on the nonprofit and public sector arts organizations and, unlike other studies, also includes the value-added aspect of the event-related spending by arts audiences.

Latest from ArtsBlog for Rhode Island

Find Arts Organizations in Your State

Find an arts organization in your area who has worked with or is a member of Americans for the Arts.

Your State doesn't have a VoterVOICE Action Center!

Local arts advocacy is about to get a whole lot easier! 72 percent of Americans engage in political activity online, but harnessing that activity at the local level can be challenging.

Now through Americans for the Arts partnertship with VoterVOICE, local arts agencies can have access to the latest in grassroots technology.

Ready to get your community involved in arts advocacy? Learn how to get a VoterVOICE action center!

Want to see more on your state page?

The state pages are meant to not only put resources that relate to your state at your finger tips but also to give you an area to spotlight the work you are doing in your state to advance the arts.

Hoping to see more resources for your community here? Have a story about your state you want to share?

We want to hear from you–help us represent your state.