National Recognition to the Best in Public Art Projects Annually

Click on any image below to access details and view more images for the selected public art.

Hard in the Paint 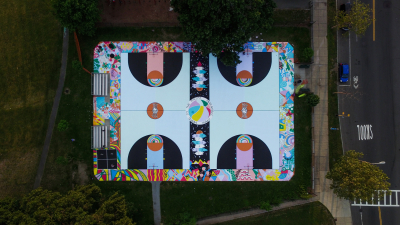 Hard in the Paint, Harambee Park is a public basketball court makeover in Boston's Dorchester neighborhood, the culmination of Molteni's Boston AIR residency through the City of Boston with the BCYF Perkins Community Center. For 11 months, Molteni worked with youth and teens from the neighborhood, hosting after school workshops on art, athletics, public space and social justice. The final 20,000 square foot basketball court mural, painted collaboratively over 2 weeks in June, exhibits shapes, colors and marks found in the students' own drawings of their dream basketball courts which were also displayed publicly during the painting process. In response to the courts centerpiece "Boston's Got Wings" (originally painted by Redbull referencing their slogan “Redbull gives you wings”), neighbors were asked “What do YOU think Boston's Got?" Their answers served as a reclamation of this existing half-court feature. Such multilingual phrases were compiled in a community zine and referenced in the intricate court patterns.