National Recognition to the Best in Public Art Projects Annually

Click on any image below to access details and view more images for the selected public art. 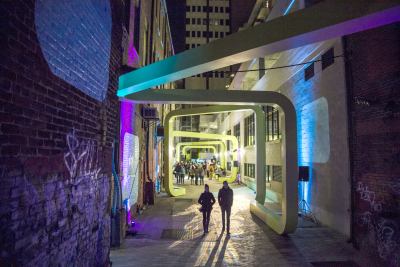 Passageways 2.0 was born out of River City Company and the AIA Tennessee’s initial 2016 alley activation program, which consisted of 5 small alleyways temporarily converted into pop-up art installations. The overwhelming positive response from the public encouraged River City Company to initiate Passageways 2.0 with the goal to commission a larger scale permanent installation in a more significantly-sized, unused and rundown alleyway in the heart of Downtown.

In 2017, River City Company organized a public design process with significant community input to activate a blighted 6200 sq ft. alleyway in City Center. The goals of Passageways 2.0 was to create a sense of place, enhance economic development of City Center, and to demonstrate the value and the potential of unused spaces in our urban core.

City Thread designed by SPORTS was ultimately selected as the winner of the Passageways 2.0 design competition. City Thread creates a space that builds upon the legacy of Chattanooga and the character of downtown by extending the attitude of adventure and exploration that the “Scenic City” is known for and bring a sense of discovery and stimulation to this unused downtown space. Consisting of a continuous linear volume constructed from a series of larger, simple steel tubes, the project physically connects visitors with a single gesture while also projecting a multitude of dynamic conditions. By virtue of its geometry and formal manifestation, the project possesses many potential conditions including lounging/sitting, mini-stages, framing community murals or art, large gatherings, farmers markets, and movie screenings, among others. The design is intended to allow both users and those in charge of programming activities to interpret the project and discover different ways to utilize the alley.

City Thread has created a new urban landmark in the downtown region. Several tenants along both sides of the alley have moved into these properties in hopes to take advantage of the adjacent space it provides for their customers. In Spring 2019, the space will also host community organizations’ public events and programming, offering opportunities for the public to connect and feel a sense of belonging downtown.

Public Space
Streetscape
Wall
The project site, a 6200 sf alley in Chattanooga, was formerly a dingy, unused (except for illicit activities), and disconnected space in the downtown area. Now the alley is a visually and socially vibrant space that serves the City Center community and provides a renewed sense of urban excitement and engagement between the numerous parties downtown. The space is aligned by various buildings and retailers including a new, 120-unit apartment building, several new restaurant/cocktail/coffee concepts, many startup companies occupying office space, as well as established businesses like a cigar shop and a billiards club. Given the immediate context of downtown Chattanooga - a now growing community of innovators – the project has now created a place that people can come together, exchange ideas, and feel connected. Situated in the heart of a city that privileges how infrastructure can enhance urban life (take, for example, Chattanooga’s history of railways, and more recent investment in fast city-owned fiber internet), the project is intended to operate as a piece of urban infrastructure that creates a vibrant public space accessible to all.
10 E 7th Street
Chattanooga, TN
United States
click the map to enlarge