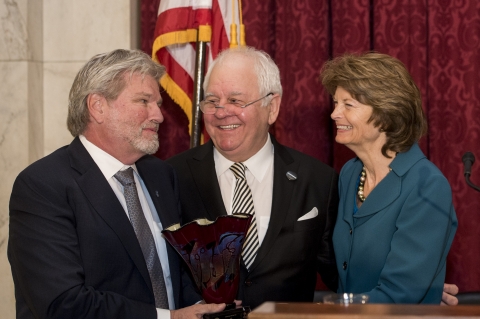 Serving over 15 years in the U.S. Senate and before that in the Alaska State House, Senator Lisa Murkowski champions support for the arts.

Under her current chairmanship of the Senate Interior, Environment Appropriations Subcommittee, she understands the impact of the National Endowment for the Arts (NEA), especially in rural areas.  She annually helps to lead efforts to protect its federal funding, for, in her words, “There is nothing, nothing that holds us together more as Americans, as human beings, than what comes to us through the arts…” For example, in 2013, she led discussions with Sens. Reed (D-RI) and Udall (D-NM) to craft a bipartisan Senate NEA budget request of $155 million at a time when the counterpart U.S. House subcommittee was proposing a nearly 50% cut to the agency.  Sen. Murkowski also supports ongoing Healing Arts Partnership work to provide access to proven creative arts therapies, as part of the health and recovery of veterans, U.S. servicemembers, and their families.

Sen. Murkowski also serves on the Senate Health, Education, Labor & Pensions Committee, where she fights for access to arts education. She was among the first to stand up to try to find a way forward to provide the full authorized funding level of $1.65 billion for the new Student Success and Academic Enrichment Grants, which were authorized in the bipartisan Every Student Succeeds Act (ESSA) and can support arts education in K-12 schools. Moreover, she works to ensure continued opportunities for afterschool programs like the 21st Century Community Learning Centers, which support afterschool, out-of-school, and expanded learning time in schools that can include the arts.

As a proud member of the Senate Cultural Caucus, Sen. Murkowski works with the full Caucus to advance the arts, culture, and humanities in America—and to continue to build “cultural infrastructure.”

Check out this congratulatory letter from Americans for the Arts member Benjamin Brown, chair of the Alaska State Council on the Arts.  He notes that, “Lisa Murkowski has been a friend and supporter of the arts since before her days of service in the Alaska House of Representatives. She understands both the intrinsic and instrumental benefits that the arts provide to all Americans, and especially appreciates the ways in which arts and culture make life in Alaska rewarding and prosperous.”