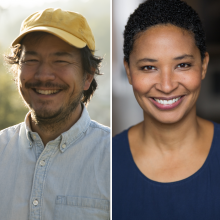 At a time when Americans’ trust in democracy and one another is at another all-time low, what strategies from current and past political and creative practices hold promise for creating a culture of citizenship and participation? What role does culture play in creating a civic imagination and creating a future for Democracy in America?

Americans for the Arts is pleased to host “Seeing the Shape of Our World: Democracy and Civic Imagination,” a conversation between Rosten Woo, civic artist and 2021 Johnson Fellow, and political theorist Dr. Danielle Allen. From their unique vantage points and experiences, Woo and Allen engage in a lively exploration of the role of sacrifice and loss in democracy, how we the people can make moral sense of our times, and what’s needed to construct a shared notion of our historical condition and paths forward to an inclusive, just, resilient, civic culture.

Rosten Woo is a 2021 recipient of Americans for the Arts’ Johnson Fellowship for Artists Transforming Communities. Since 2010, Woo has been producing civic artworks that illuminate complicated histories and present-day issues in physical and socioeconomic environments of Los Angeles where he is based. He works in collaboration with community organizers, policy researchers, and local governments and has produced permanent installations, temporary activations, and long-term collaborations with community organizations throughout Los Angeles, with a particular focus on communities in downtown Los Angeles, Chinatown, Little Tokyo, and Skid Row.

Dr. Danielle Allen is a political theorist who has published broadly in democratic theory, political sociology, and the history of political thought. She is the author of Talking to Strangers: Anxieties of Citizenship since Brown vs. the Board of Education (2004) among many other publications. Allen was honored with a MacArthur Fellowship and is former Chair of the Mellon Foundation Board, past Chair of the Pulitzer Prize Board, and a member of the American Academy of Arts and Sciences and the American Philosophical Society. She has chaired numerous commission processes and is a lead author on influential policy roadmaps, including Pandemic Resilience: Getting it Done and Our Common Purpose: Reinventing American Democracy for the 21st Century.

Photo of Rosten Woo courtesy of the artist. Photo of Danielle Allen by Laura Rose.