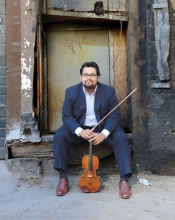 Americans for the Arts is pleased to announce that violin prodigy and social justice advocate Vijay Gupta will deliver the Americans for the Arts 33rd Annual Nancy Hanks Lecture on Arts & Public Policy on March 30, 2020, at 6:30 p.m. in the Eisenhower Theater of The John F. Kennedy Center for the Performing Arts. Tickets to the lecture are free, but reservations are required and seating is limited. Register for your free ticket here.

Gupta, an esteemed performer, communicator, citizen-artist, and 2018 John D. and Catherine T. MacArthur Fellow, is also a leading advocate for the role of the arts and music to heal, inspire, provoke change, and foster social connection. He is the founder and artistic director of Street Symphony, a nonprofit organization providing musical engagement, dialogue, and teaching artistry for homeless and incarcerated communities in Los Angeles.

Gupta currently serves on the faculty of The Colburn School and Longy School of Music and is the senior program and artistic advisor of Young Musician’s Foundation, an LA-based musical training, performance, and advocacy organization. Gupta also serves on the board of directors of Americans for the Arts, as well as Los Angeles’s beloved 24th Street Theatre. Gupta was also named a 2017 Citizen Artist Fellow with the John F. Kennedy Center for the Performing Arts.

A seasoned international performing artist since the age of eight, Gupta made his solo debut with the Israel Philharmonic Orchestra under the baton of Zubin Mehta at age 11. In 2007, at 19, Gupta joined the Los Angeles Philharmonic Orchestra, and served as a member of the First Violin section through 2018. He has appeared as a guest concertmaster with the Los Angeles Opera and the Philharmonia Orchestra of London, and is an active recitalist, soloist, and chamber musician.

The Nancy Hanks Lecture is the leading national forum for arts policy, providing an opportunity for public discourse at the highest levels on the importance of arts and culture to our nation’s well-being. The lecture is presented as part of the annual National Arts Action Summit in Washington, D.C. and is named for Nancy Hanks, former president of Americans for the Arts and chairman of the National Endowment for the Arts. She devoted 15 years of her professional life to bringing the arts to prominent national consciousness. Past lecturers include Rita Moreno, Norman Lear, Darren Walker, John Maeda, Robert Redford, Doris Kearns Goodwin, Wynton Marsalis, Alec Baldwin, and Ken Burns.