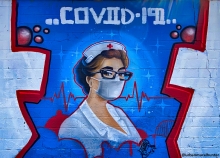 On March 15, 2022, the U.S. Bureau of Economic Analysis (BEA) and National Endowment for the Arts (NEA) released their annual Arts and Cultural Production Satellite Account (ACPSA) report—an expansive set of measures of arts and culture in the U.S. economy, including its share of Gross Domestic Product (GDP). This report, detailing the economic impact of the creative economy in 2020, offers the first snapshot of the constricting impacts that the COVID-19 pandemic had on the sector.

For the first time since the post-Great Recession period, the year-over-year value add of arts and culture production declined in 2020, from $930 billion in 2019 to an estimated $877 billion in 2020. Even with that decline, however, the economic impact of the creative sector is significant: the sector represented 4.2% of the nation’s Gross Domestic Product (GDP) in 2020 and supported 4.6 million wage and salary workers. Its economic contribution, even in this pandemic-impacted year, was larger than transportation and warehousing, mining, or agriculture.

The impacts of COVID-19 were myriad and significant, and will likely resonate into the 2021 data when it is released in the future:

The arts continue to be an important share of state economies. The NEA has created an interactive map through which visitors can determine state-level estimates of the value added to Gross State Products in each state, and the National Assembly of State Arts Agencies has created an interactive dashboard for each state.
Note: As is usual, the BEA made small revisions to the 2019 national data set and numbers you may have grown accustomed to in the past will look slightly different the next time you see them. For example, the 2019 national figure is now $930 billion and no longer $919.7 billion.

Pictured: Central panel of a “STAY HOME” mural by Milton Coronado, located at Project Logan at Fullerton and Milwaukee in the Logan Square area of Chicago, Illinois. Photo by James aka @urbanmuralhunter from Flickr, used under Creative Commons license.