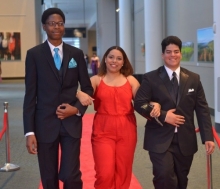 A newly released half-hour documentary tells the story of The Science and Technology High School in Springfield, Massachusetts, where dropout rates are so high and standard test scores so low that the state rates it Level 4. At Level 5 the state has the right to take over the school and possibly send its 1500 students out into the city’s struggling public school system.

But the school band (yes, the school band) has proven an unlikely ray of hope and a source of pride for SciTech, and for the city of Springfield. Eight years ago the band didn’t exist – today, under the leadership of the young, charismatic and decidedly nerdy Gary Bernice, the 500-member band is flourishing. And while the school graduation rate remains a disheartening forty-five percent, band members who stay in the band for at least a year graduate at a rate of ninety-five percent.

The film asks that question as it follows the SciTech Band from the first day of practice to the winter holiday concert that takes place just three months later. In that concert, everyone performs, even the beginners who, at start of the year, had never touched an instrument.

The film includes interviews with Gary Bernice and with students at all levels in the band. It also includes the “Mentoring Through Music” after school program, where student mentors work with beginners to sharpen their musical skills.

The film is for general audiences and entirely appropriate for children of any age. Particular groups that will find the film of interest include music and arts advocacy associations, teachers, and folks working in educational policy, and in programs aimed at increasing graduation rates in struggling high schools. The online educational community will also find the film of interest.

The film is a production of Florentine Films/Hott Productions, a long-time producer of major award-winning films for public television broadcast. The film, and four bonus videos, is available for free and can be seen here.