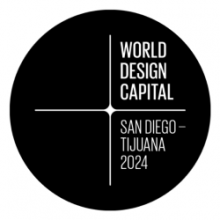 The cities of San Diego in the United States and Tijuana in Mexico have been jointly named World Design Capital® (WDC) 2024 by the World Design Organization, as a result of their commitment to human-centered design and legacy of cross-border collaboration to transform the region’s natural and built environments.

Under the theme of HOME (Human-Centred, Open, Multidisciplinary/Multicultural, Experimental), the new WDC is hoping to position the transnational community as a place of design synergy and opportunity with a particular focus on equity, access, and inclusion. Building on years of binational collaboration, representatives of both cities hope the designation will cultivate an even more robust design-driven ecosystem across local industries, communities, and governments.

WDC is a biennial designation that recognizes cities for their effective use of design to drive economic, social, cultural, and environmental development. 2024 will mark the ninth cycle for the program, with San Diego and Tijuana being the first binational designation in the program’s history. San Diego is the first U.S. city to receive the WDC designation and Tijuana is the second city in Mexico to hold the title.