Veterans Supporting Each other Through the Arts 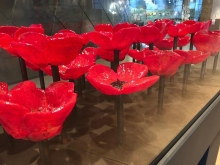 Michael Mitchel, post commander of VFW Post 1 in Denver, Colorado commissioned 100 glass poppies from Hot Shop Heroes at the Museum of Glass in Tacoma, Washington. The “Poppies of Remembrance” wll serve to commemorate the 100th anniversary of Armistice Day, the end of World War I, in two separate exhibits: first from January through March at the Museum of Glass, then October to November 11, 2018 at the Denver Botanic Gardens. They will then be available for purchase to support the revival and renovation of Denver’s VFW Post 1, our country’s oldest Veterans of Foreign Wars post and home of the only VFW Post Veterans Arts Council.

Each poppy was created by Hot Shop Heroes participants at the Museum of Glass in Tacoma, where soldiers with complex physical and mental injuries are served through a glassblowing program in a partnership with the Warrior Transition Battalion (WTB) at Joint Base Lewis McChord (JBLM). Hot Shop Heroes was conceived by American glass sculptor and Tacoma native Dale Chihuly, who designed the program in 2013 to give military personnel a chance to learn glassblowing techniques.

Most recently, the classes have been expanded to serve soldiers outside of WTB and Veterans in the community. For many participants, the program has produced physical, emotional, and spiritual benefits, and evaluation has found that it is particularly beneficial for participants diagnosed with Traumatic Brain Injury and Post-Traumatic Stress Disorder.

Since 1921, poppies have been the flower of remembrance for military personnel lost during a war due to the iconic poem “In Flanders Fields” by Major John McRae, a Canadian surgeon attached to the 1st Field Artillery Brigade in Belgium during WWI.

On behalf of Hot Shop Heroes, the Museum of Glass is listed in the Directory of the National Initiative for Arts & Health in the Military at Americans for the Arts.