Many American cities and communities are on the edge of crisis. With pressing economic and social needs, decision makers, who must decide how to allocate scarce resources among competing and worthwhile objectives, often feel they cannot justify spending on activities that fall into the seemingly elitist category of “culture.”

Those arguing for public support of culture have concentrated on producing economic impact statements—an effective, yet limiting argument. Cultural activities can be a major economic force in many communities, but they also have a profound impact on the lives of local residents. Economic impact arguments lack the effects cultural strategies have on education, cultural identity, race relations, community pride, quality of life and other social functions.

Culture must take its rightful place as an important element of both economic and social agendas. Those involved in cultural promotion need to champion the adoption of a more comprehensive vision of the place of the arts and humanities within American society. Those involved in managing cities need to understand the role of cultural activities in tackling some of the day’s thorniest problems. It should be remembered by all that culture defines who we are in all of our diversity, and as such is central in binding and mending the social fabric.

The cultural agenda must be expanded in the new millennium. To begin this process, Partners for Livable Communities (Partners) is taking concrete steps to redefine and update the premises upon which the advocacy of culture is built. It is time to expand the dialogue between “client” civic decision makers and producers in the arts and humanities fields. Discussion should focus on setting mutual goals and designing practical strategies that would maximize the ability of culture to work as the policy makers ally in confronting the tough issues that are driving the state of America’s communities today. [Introduction, p. 8]

Mobilizing Arts and Cultural Resources for Community Development, 2nd Edition was made possible by the collective reflections, experience and expertise of the many individuals who have contributed to the Culture Builds Communities program throughout its more than 20 years. This guide is a comprehensive, action-oriented resource for a broad range of arts and cultural advocates—from grassroots community organizers to elected officials— who are approaching the field from many backgrounds and agendas. It expands on Partners’ six gateways for mobilizing resources, which are demonstrated by more than 30 best practices that inspire local action and, in many cases, can be adapted within other communities. It also provides a practical framework, resources and worksheets for mounting a successful project in any community. 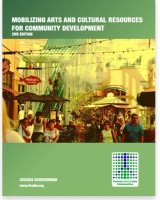 Login or Create an account to add documents for consideration to the database.

Published by:
Americans for the Arts
Center for Arts and Culture
Arts & Health Alliance